Study of the Lithostratigraphy and Biostratigraphy of Ammonite Fauna of the Dalichai Formation at the Mahdishahr Section, N Semnan

The Middle Jurassic rocks are widely distributed and superbly exposed in the AlborzMountains (Northern Iran). In the central part of the mountain range, near Mahdishahr (Northern Semnan), the Dalichai Formation, from the underlying conglomerate and sandstones of Shemshak Formation to the limestones of the overlying Lar Formation, is completely exposed on the southern slopes of the kuh-e-Rahband. At this area, the sedimentary succession with nearly 122 m thickness subdivided into four members starting with marl and medium to thick-bedded grey limestones to marly limestones. The lower boundary with the siliciclastics of the underlying Shemshak Formation is disconformity, whereas the upper boundary with the light and cliff-forming carbonates of the Lar Formation is rather inconspicuous and transitional. The Dalichai Formation in the east of Mahdishar section is fossiliferous. The ammonite fauna consist of 5 families, 22 genera and subgenera and 40 species, among them 8 species are recorded for the first time from Iran. Based on the ammonite fauna, 9 biozones were recognized that indicated the age of the Dalichai Formation in the investigated area ranges from the Upper Bajocian? to Upper Oxfordian. Pleobigeographically, the fauna shows close relationship to west Europe and sub-mediterranean regions. This indicates a paleogeographic position of the area at the northern Tethys during the Middle Jurassic. 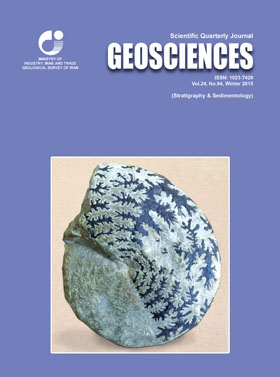