The Neian area in northwest of the Lut block host a polymetallic (Pb-Zn-Cu-Au-Ag) vein system which was developed within a series of volcanic rocks ranging in composition from dacite through rhyo-dacite and andesite to trachy-andesite. These rocks were formed by two distinct stages of lava eruption. The rocks hosting mineralization possess calc-alkaline and shoshonitic nature and were formed in an orogenic environment. The concurrent and opposite function of two major faults in two sides of the mining area caused the generation of tensional conditions in the middle of the block and led to the development of a series of minor faults with dip-slip and strike-slip components within the block. These fracture zones acted as suitable conduits for fluid infiltration and development of ore-bearing siliceous veins. The factors such as extensive fractures and existence of pyroclastic rocks with high permeability caused the development of widespread alteration zones within the host rocks. Three distinct types of alterations were developed in the Neian deposit: (1) silicified (quartz, chalcedony, adularia, calcite, illite, and sericite); (2) argillic (illite, smectite, quartz, kaolinite, adularia, chlorite, sericite, and zeolite); and (3) propylitic (chlorite, calcite, albite, epidote, quartz and smectite) which are accompanied by five stages of mineralization. These alterations were formed by the chloride-bearing solutions with pH ranging from neutral to very alkaline. Mineralization at Neian is in the form of vein, veinlet, and dissemination within the host rocks and is also associated with hydrothermal breccias. The most important ore minerals at Neian are pyrite, sphalerite, galena, chalcopyrite, marcasite, pyrrhotite, melnikovite, and hematite. The most important gangue minerals also include quartz (chalcedony), cristobalite, calcite, dolomite, siderite, barite, fluorite, and adularia. The evidences like (a) the association of mineralization with siliceous-carbonate veinlets, (b) the presence of adularia, illite, bladed calcite, and hydrothermal breccias, and (c)  the presence of alteration minerals such as quartz, adularia, illite, albite, chlorite, interlayered illite-smectite, calcite, and pyrite in the Neian hydrothermal system indicate that these minerals were formed by chloride solutions with almost neutral to very alkaline pH in a low-sulfidation epithermal environment. 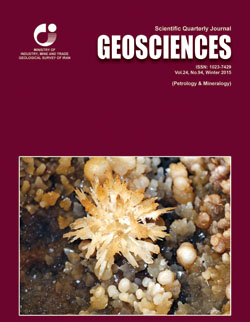