The Zagros orogen is located along the central part of the of Alpine-Himalayan orogenic belt, and is one of the world’s youngest orogenic systems. Geological and deformational characteristics of this orogen are completely different from other parts of the Alpine orogenic belt. Of the most obvious structural features of the Zagros orogen are the occurrence of large-scale folds. The lack of geometrical uniformity along their axes is the most important character of these folds. General trend of the structures formed in the Zagros region (folds and major faults) is northwest–southeast, which is locally deflected due to different reasons such as effects of large fault zones. In some places, the changes in the initial pattern of folds may be related to more than one tectonic parameter. The simultaneous operation of two or more parameters such as faulting or salt penetration can also significantly change the fold patterns. The Ahmadi anticline, which is located 50 km east of Shiraz, is one of such folds where this property (i.e. changes in fold pattern) can be investigated. The fold has a box fold model with the axis trending NNW-SSE, and is located south of the Main Zagros Thrust Fault, as well as close and parallel to it. It is also situated in the Zagros folded zone and forms the northern boundary of the Sarvestan plain. The Ahmadi anticline is an open and symmetric fold, trending along NNW-SSE direction. Along the anticline, the fold axis is never straight and has been deflected at several points. The most significant fold axis deflection is observed along the eastern termination of the anticline, where the fold axis is deflected by about 62 degrees toward south. 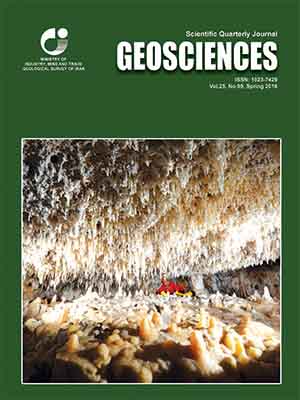