The main objective of interpretation of acquired gravity data on the Earth's surface is to determine the contrasts in density or shape/dimension of mass anomalies. Interpretation of gravity data can be done through an inversion process. In this research, a block model has been considered for the subsurface anomalous mass. By considering a constant initial density (about 2.6 gr/cm3) for all blocks and by using inversion method, distribution of density of the anomalous mass was estimated and interpreted. In this research, Occam method is used to invert 246 gravity data collected in 2007. Results of the gravity data inversion show sufficient fit between observed and calculated gravity data. Using this inversion method, distribution of density in the subsurface layers related to sediments and basement are estimated in this area. Since there is a density contrast between sedimentary layers and basement, the estimated density distribution can help to explore the lithology of formations as well as the discontinuities in them. Densities less than 2 gr/cm3 in horizontal and vertical sections obtained from the inversion are attributed to the alluviums. The depth of these sediments, which include sand, silt and clay of different percentages, is estimated to be less than about 200 m. Unequal density distribution along the layers is taken to indicate fractures. In fact, these fractures are associated with part of the Tabarteh fault in this area, which caused numerous earthquakes (but less than 5 Richters in magnitude) around the Arak and Dawood Abad cities in past years. 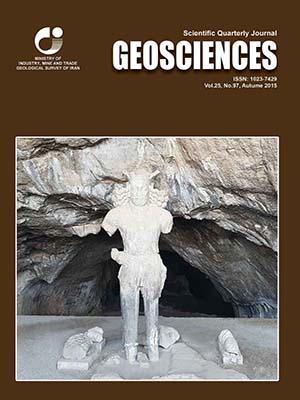