The studied granitoidic intrusion with about 50 km2 area is located in the SW of Kelardasht, one of the regions in MazandaranProvince. It is one of the pluton masses of the Central Alborz structural zone. The mass has an age between 54±4 and 56±3 million years (late Paleocene to early Eocene) and has intruded in the Mobarak and Shemshak formations. Petrologically it contains of two units of felsic (granite, qz-syenite, and qz-monzonite) and intermediate to mafic (monzonite to monzodiorite, diorite, and gabbro). The rocks of the first group especially granites and q-monzonites show many mineralogical and textural similarities and in which the evidences of magma mixing like rapakivi texture, poikilitic texture, acicular apatite, calcic plagioclase "spikes" in plagioclase, and micro granular mafic enclaves can be seen. These rocks have weak metaaluminous to peralumine nature (granite samples) and are richer in K2O+Na2O, K2O and the elements of Rb, Th, Hf than the second group. Due to the diagram related to REE, the rocks of this group have remarkable enrichment of LREE and related to the behavior of Y, Ba, Ce, and Zr in segregation process, they show the properties of low temperature I-type granites. In the second group, monzonite and monzodiorite rocks also show the evidences of alkaline metasomatism, associated with magma mixing textures including acicular apatite, septum biotites and anortite spikes in plagioclases. These rocks have meta alumine nature and show more richness in FeOT, MgO, CaO, bP2O5, TiO2, and the elements such as Sr, Ba, V, and Y than the first group; and also they show the properties of the high temperature I-type granites. Due to the geochemical evidences and the age of the mass, it can be categorized as post orogenic granite types, which have the properties between VAG and WPG. The isotopic investigation of 143Nd/144Nd revealed that only the granites of the region have can have enriched lithospheric source (negative εNd) and the other rocks have a depleted mantle source (positive). According to the petrographical and geochemical evidences, magma mixing has played an important role in magma evolution, and therefore, the crust melting model by mantle-derived magma is suggested for the magma generation of the area. 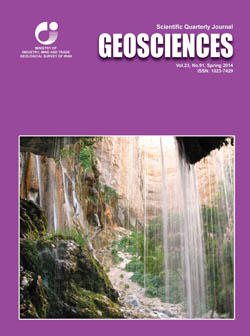