The Sargaz massive sulfide deposit is situated near Jiroft (south-east Kerman), in the southern Sanandaj-Sirjan Zone. The host rocks are Upper Triassic to lower Jurassic(?) pillow basalt. The occurrence of mineralization in basaltic to basaltic andesite, the existence of Jaspilite and Fe-Mn horizons in distal part of the deposit, the occurrence of a stringer zone discordantly under massive ore, the presence of pyrite as the main sulfide mineral, brecciated textures and mineralogical zonation in the massive ore, all suggest that the Sargaz deposit can be classified as a volanogenic massive sulfide deposit. The mineralogy is reasonably simple, with pyrite being the main sulfide mineral, with lesser chalcopyrite and sphalerite. On the basis of different generation of minerals, shape, size, their mutual geometry, relative timing of crosscutting structures and replacement features, brecciated textures and mineralogical zonation indicate that the growth history of the Sargaz deposit was complex due to syn and post depositional processes. Based on mineralogical, textural and paragenetic relationships, four principal stages of mineralization are recognized. Stage I mainly consist of fine grained pyrite (As rich), and locally sphalerite, quartz and barite. Framboidal pyrite, colloform pyrite and sphalerite were formed during this stage. After stage 1 mineralization, collapse of the sulfide mounds took place probably due to dissolution of anhydrite matrix, producing accumulations of pyrite breccias. Following this mound collapse, during stage II, pyrite (Co rich), sphalerite, tetrahedrite-tenantite and galena were formed as euhedral and coarse grains. Stage III deposits consist of  chalcopyrite replacements and zone refining process. During this stage, due to zone refining, a chalcopyrite-pyrite zone was developed at the lower part of the massive sulfide lens and a sphalerite-rich zone formed in the upper part. During stage IV, over refining process, led to the dissolution of stage III chalcopyrite and  base-metal depleted pyrite body in the lowermost part of the massive sulfide lens and carbonate veins were emplaced into the sulfide lens replacing earlier barite. 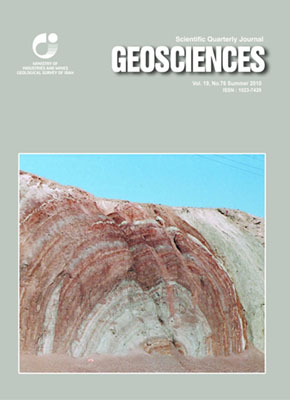